Posted on 2nd December 2021 at 15:00
By Sean Linley, Costs Draftsman
Since the SCCO Guideline Hourly Rates (GHRs) were put into effect from 1 October 2021 arguments have morphed into whether they are relevant or have any application to costs incurred before 30 September 2021.
This is the argument which was adopted in Goodwin v Avison and Others [2021] Costs LR 1323. The Paying Party had sought to argue that the relevant GHRs were those in force before 30 September 2021 for work undertaken before that time. HHJ Davis-White QC stated that he had "taken into account the Guide to the Summary Assessment of Costs re-issued by the Master of the Rolls in September 2021 (the “Guide”) and to be used from 1 October 2021. The guideline hourly rates in the previous guide were not ones that I would have adopted without more in any event, as is well recorded they were extremely out of date by 2021."
"I should add that even had I carried out the exercise of preparing my judgment in September 2021, before the Guide came into force, I would have reached the same conclusions and would have taken the Guide into account as representing best practice and the hourly rates there advised as being the best evidence for an appropriate starting point when compared with the historic rates otherwise available."
The Paying Party had challenged the hourly rates claimed and had submitted that the relevant rate was £217.00 for a National 1 Solicitor, in line with the previous GHRs. The Receiving Party had claimed two Grade A rates of £400.00 and £250.00 per hour. The £400.00 per hour rate applied to a Managing Director who was based in London.
The Court noted that the GHR for Grade A in Leeds was £261.00 and the applicable London rate was £373.00 (London 2) and £512.00 (London 1). The Court having consideration of the factors in the case including complexity and importance and allowed £385.00 and £250.00. The Court had taken into consideration that the Paying Party had claimed £300.00 per hour "to do much of the work in the case".
Another Receiving Party (LCF Law) had claimed £305.00 (A), £167.00 (C) and £110.00 (D). The Paying Party had again offered the old GHRs of £201.00 (A) and £146.00 (C). The Grade D rate was £1 less than the GHR. The Court referred to the new GHRs of £255.00 (A), £177 (C) and £126.00 (D). He permitted rates of £268.00 for the Grade As and allowed Grade C and D as claimed (as they were well within the rates in the Guide). He cited the urgency of the case as a reason that enhanced rates were allowed as well as the complexity of the matter.
Practical Points
The case arose from what was contentious and complex probate proceedings. The comments on costs are useful as they show that the Court recognises that the GHRs as they were before 1 October 2021 are grotesequely out of date and that they accept that the new GHRs are of assistance in assessing costs claim now (even those were work predates adoption of the new GHR rates).
It also demonstrates that the Court will take into account relevant factors when determining hourly rates with complexity, importance and urgency all cited. When assessing hourly rates the Court will have regard to CPR r44.4. These are factors which should be taken into account when advancing any costs claim.
It is not the first time that the new GHRs have been taken into account when assessing costs incurred before the new GHRs took effect. They were taken into account by the High Court in Axnoller Events Ltd v Brake & Anor (Summary Costs Assessment) [2021] EWHC 2362 (Ch) and ECU Group plc v Deutsche Bank [2021] EWHC 2083 (Ch).
It should be borne in mind that whilst the Court in Goodwin took into account the new GHRs, parties will still be tapered by the indemnity principle. If the retainer restricts a practitioner to the old guideline rates then these will be the relevant rates. The findings in Goodwin, however, reinforce that practitioners should (if they have not already) be reviewing existing retainers and if appropriate altering hourly rates for new matters and seeking to agree increased rates for existing matters. It's also a factor which ought to be taken into account when preparing a Costs Budget with any increased rates reflected accordingly.
There are other arguments which can be relied upon including inflation (which is significant over the past 11 years) and attention can also be drawn to the fact that the final report by the CJC was published in July 2021 with the Master of the Rolls confirming acceptance of the proposals later the next month. Indeed the rates adopted were proposed as early as January 2021.
It's important as well that practitioners remain alive to future alterations to the hourly rates with the Master of the Rolls signalling that a further review should be scheduled within 2 years time.
The new GHRs are as follows: 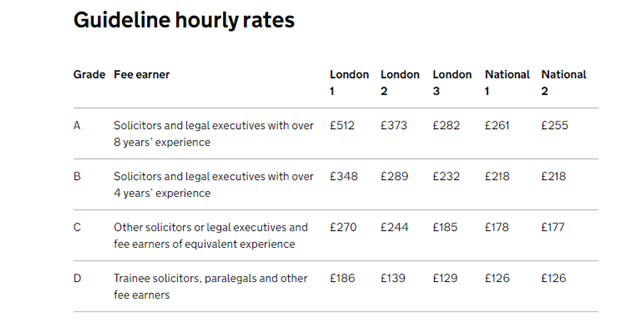 Are you unsure about the application of new Guideline Hourly Rates or need to discuss costs in general?
Call 01482 534567 or email info@carterburnett.co.uk for a no-obligation chat with our friendly team.
Tagged as: Hourly Rates
Share this post: