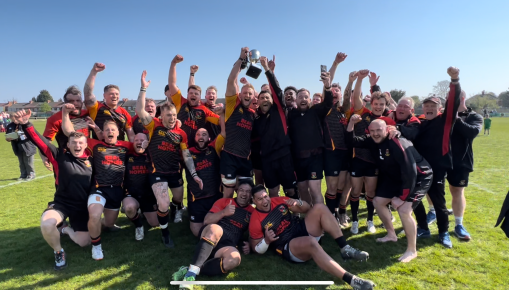 Posted on 26th April 2022 at 16:13
Congratulations to our very own Stephen Johnson for playing a key role in Hull RUFC’s first ever promotion to National League 1.
The experienced Costs Draftsman, who has spent the last five years at the club, helped to seal the success with a 31-29 derby win over Hull Ionians at the weekend.
Not only did the win secure a historic promotion, it was their 19th consecutive victory after a highly-consistent season in the National League Two North division.
Having agreed to act as Stephen’s player sponsor for the season, we are thrilled to see the club’s effort and determination rewarded.
Reflecting on the successful campaign, Stephen said: “It’s been a great season which has certainly exceeded all expectations.
“Personally, I’ve had a good year – missing just three games out of 30 because of new concussion protocols.
“I also managed to win a couple of Man of the Match awards too, which was nice. My best performance was the Christmas Derby game against Hull Ionians. It was the first one we’ve had in seven years and our first win for around 11 years I believe.
“I only managed to score seven tries, but I don’t mind too much because we managed to secure promotion – which was a great reward for all the hard work from everyone in the team. It’s been a fantastic season.”
Stephen has recently been selected for Yorkshire and is hoping he will get the chance to play and impress at representative level.
Share this post: